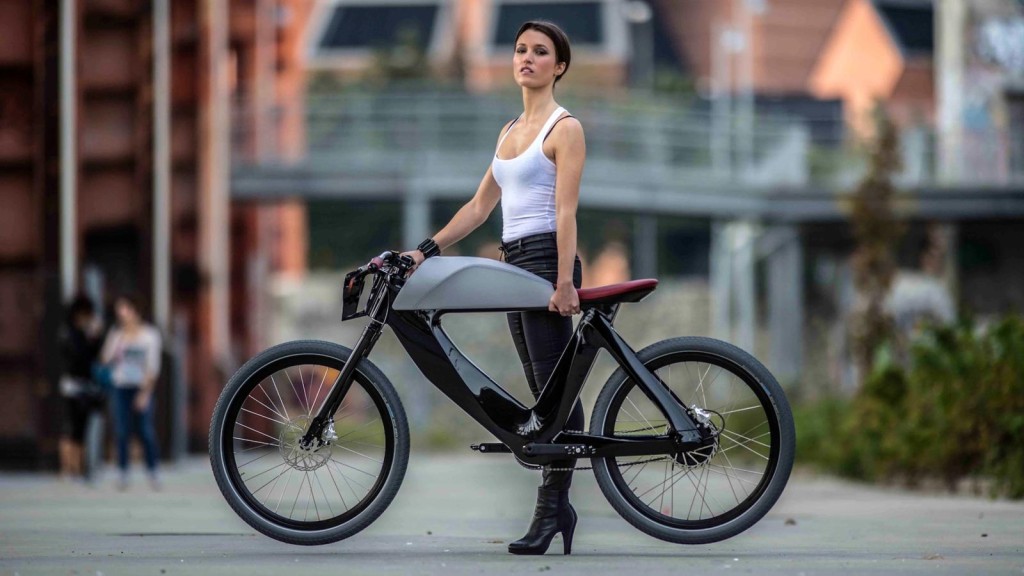 A car-free planet? The notion may not be as far-fetched as it sounds. All over the world, governments and biking enthusiasts are looking for ways to make urban environments – which for more than a century have been designed to keep motorists happy – more friendly toward pedal-pushers. To wit: on 27 September, car-clogged Paris shut off its engines for the better part of the day, highlighting the French city’s plans to implement a 150m-euro plan to make it the “world capital of cycling” by 2020. And with this surge in popularity comes a surge in choice: each year, cyclists see the arrival of dozens of new models, from bare-bones beach cruisers to composite-framed pedal-electric bikes that cost as much as a car. Herewith, we pick 10 of our favorites, including a bike that’s faster than some cars, a titanium bike that folds to the size of one of its wheels and a recumbent four-wheeled cargo hauler that’s supplanting diesel-powered delivery trucks in European cities. 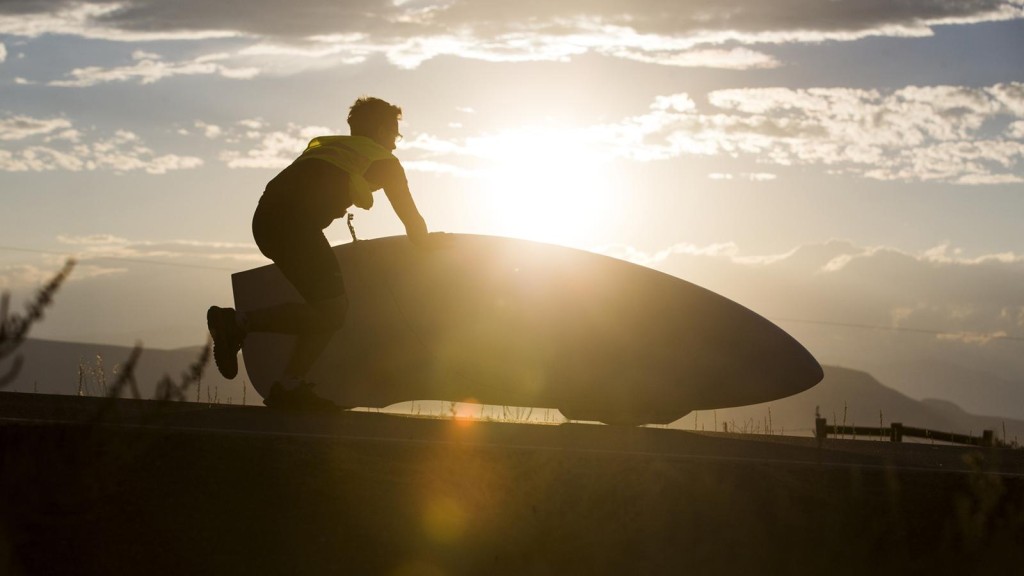 **Details:** The Eta isn’t a bike you take out for a breezy pedal in the park. This diminutive UFO is a single-minded speed machine, and on 18 September, with Canadian Todd Reichert inside, it broke the world record for the fastest human-powered vehicle during the annual World Human-Powered Challenge, hitting 139.45 kilo meters per hour (86.65mph) on an arrow-straight stretch of road near Battle Mountain, Nevada. Racers, clocked over a 200-metre section of the course, are given eight kilo meters to get up to speed and another kilo meter to slow down again. And despite its relative brevity, Reichert’s ride in the Eta was hardly a lazy Sunday cycle. The recumbent bike, which takes its name from the seventh letter of the Greek alphabet — a symbol used by engineers to denote efficiency — is a low-slung carbon fiber bullet, custom-built for Reichert’s lithe frame. Precious ounces are saved and aerodynamic purity preserved with the omission of a window; the pilot’s outward view comes via two tiny cameras and an dashboard display. 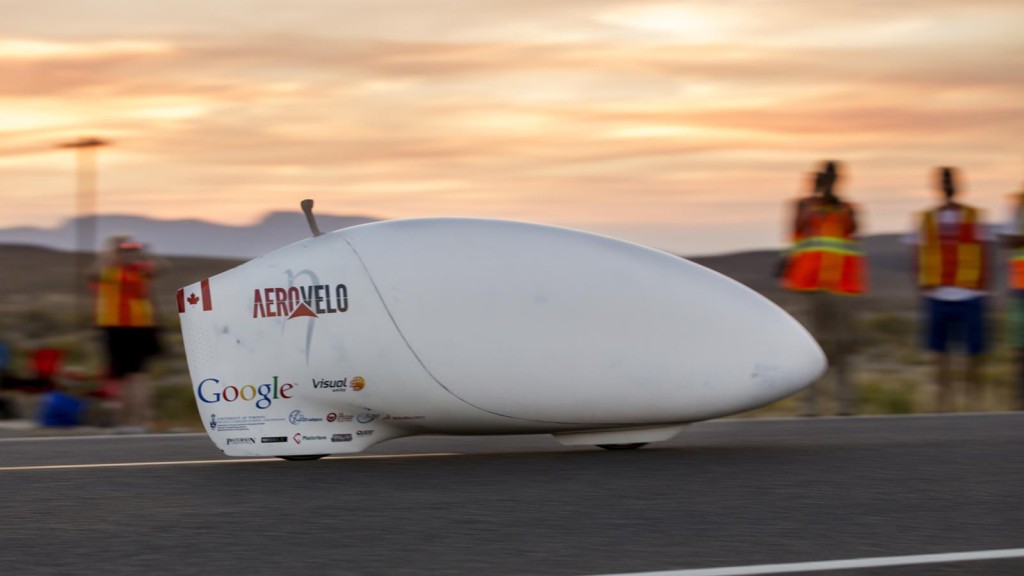 **Details:** On the road, the Helix, the namesake product of a Toronto-based startup bike maker, is unquestionably, if unremarkable, attractive. It is only when you witness this two-Wheeler trans formative trick that its true beauty becomes apparent. With a few quick moves – extend this piece, slide that lock, twist this knob – the bike goes from transporter to transportable. The company’s boldest claim for the Helix – that it folds to the size of one of its wheels – is only barely an exaggeration. The folded bike measures just 23in by 25in by 9in. And it tips the scales at a slight 21lbs, thanks to a bare-naked frame handmade entirely of titanium. Helix is poised to launch a Kick starter campaign to fund production of the bike, with plans to commence deliveries this summer. 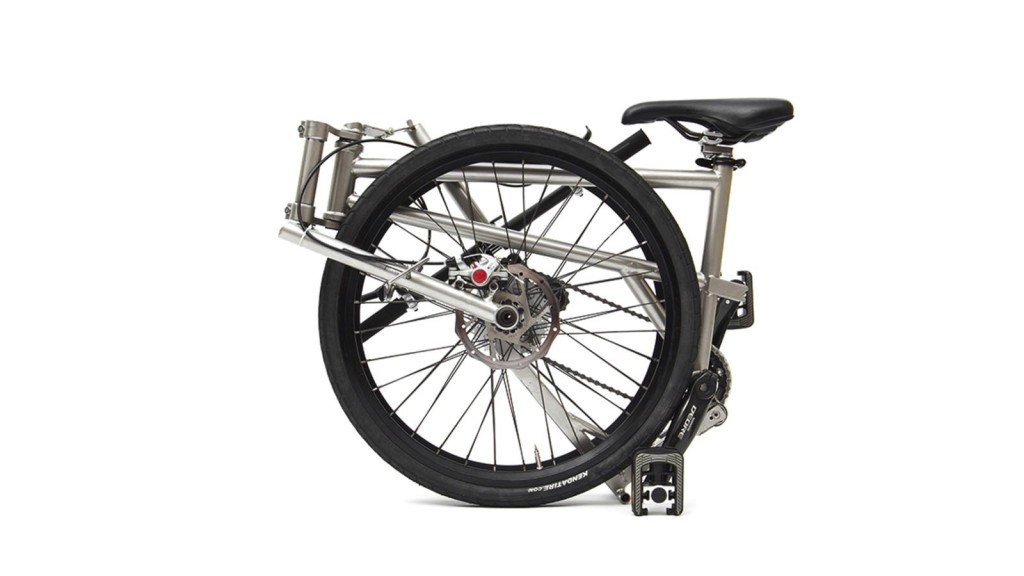 **Details:** Wooden bikes are all the rage right now, with examples that range from $90 balance bikes made of plywood to $70,000 art bikes made of steam-bent beech wood. Presented in April during Milan Design Week, Italian stylist Matteo Zugnoni’s Woo Bi (a portmanteau of, well, you know) is one of the prettiest we’ve seen. The minimalist bike features frame pieces and a front fork made of solid wood, and a grease less Gates belt drive in place of a traditional chain. When the Woo Bi goes on sale this summer, buyers will be able to select a wood species from a list that includes walnut, rosewood, ash, wedge and others, and pick the hue of the wheels and the Brooks leather hand grips and saddle. We think the prototype gets the color combination just right. Nothing says “earth friendly” quite like a solid-wood bike with bright green rims.

**Details:** A reedy, invasive grass that grows like wildfire just happens to be an ideal frame-building material, with rigidity and suppleness in equal measure. But where prior efforts to apply bamboo magic to bicycle applications have resulted in crude, heavy-handed resin “welds”, Singapore-based Bamboo Bee manages to make adjoining tubes smooth – and compact. The company, which got its start after a successful Kick starter campaign, ships a bike elegantly broken down into its constituent pieces, for final assembly in its rider’s living room or local shop. 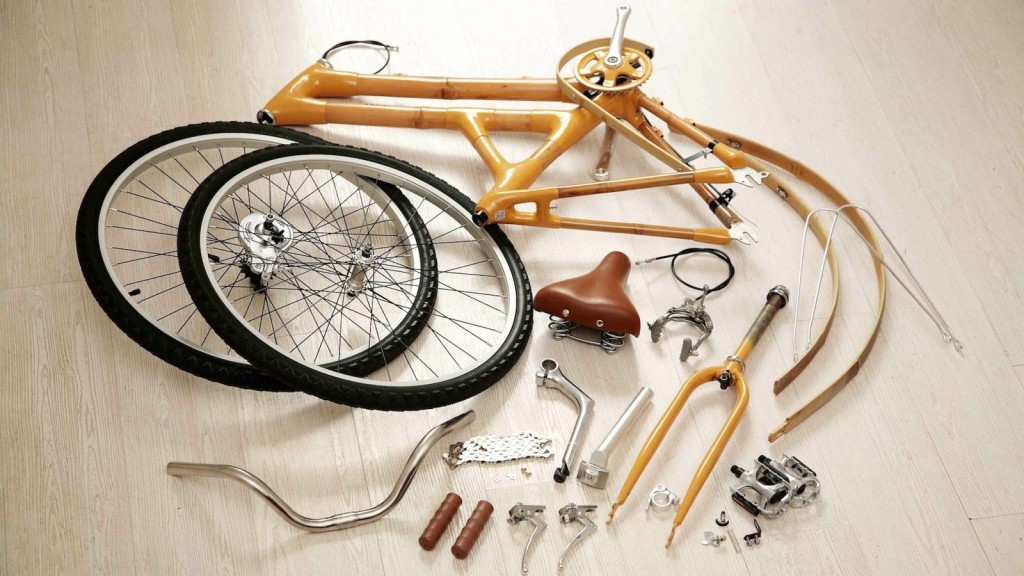 **Details:** The original Half bike was one part clever urban mobility solution, one part Cirque du Sollie prop. The sequel shifts the mix in favor of the former, thanks to the significant replacement of a single pistol-style hand grip with a more traditional, if slightly abbreviated, handlebar. What Half bike II hasn’t lost, however, is the original’s museum-piece looks, stand-up riding position and quirky mechanical. Attached to an aluminum frame, the single front wheel provides the drive and the two articulated rears do the steering. And that very tall plywood handlebar folds down to make the 18lb bike a bit easier to carry aboard public transportation – where, hopefully, the rider can get a seat. 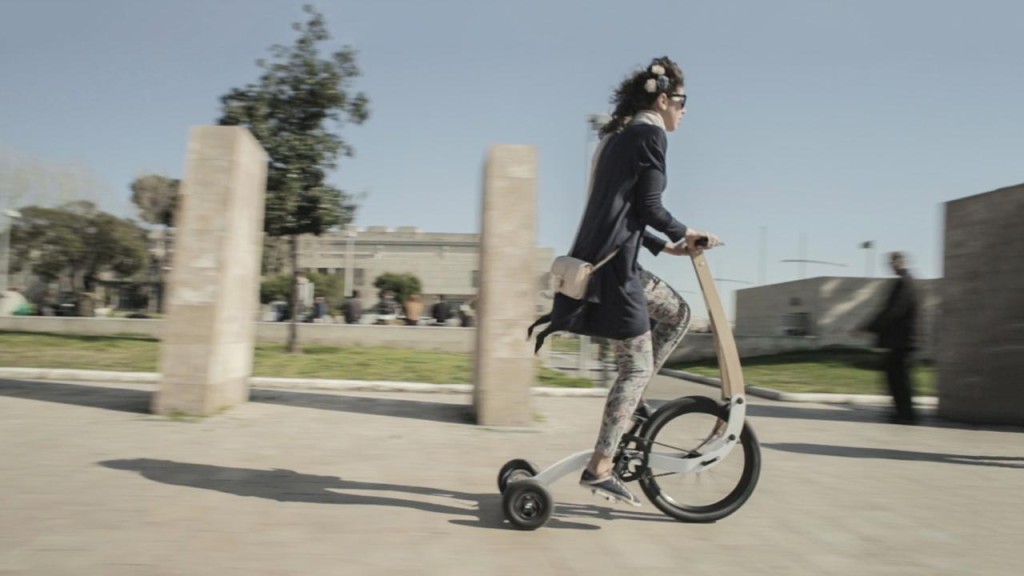 **Details:** For all the talk of optimizing traffic flow in congested urban cores, parking a car as soon as it is not needed – and continuing the in-bound journey on a bike – presents an inspired, elegant way to stave off gridlock. Ford has taken this idea on, designing the fold able MoDe:Pro e-bike for use by “couriers, electricians, and goods and delivery services”, presumably after parking their hard-working Ford Transit Connect vans (pictured). Directions to a pres elected destination are communicated not through a potentially distracting smartphone display, but via hap tic feedback channeled through to the bike’s hand grips, which vibrate to indicate proper turn direction. That, race fans, is steering feel. 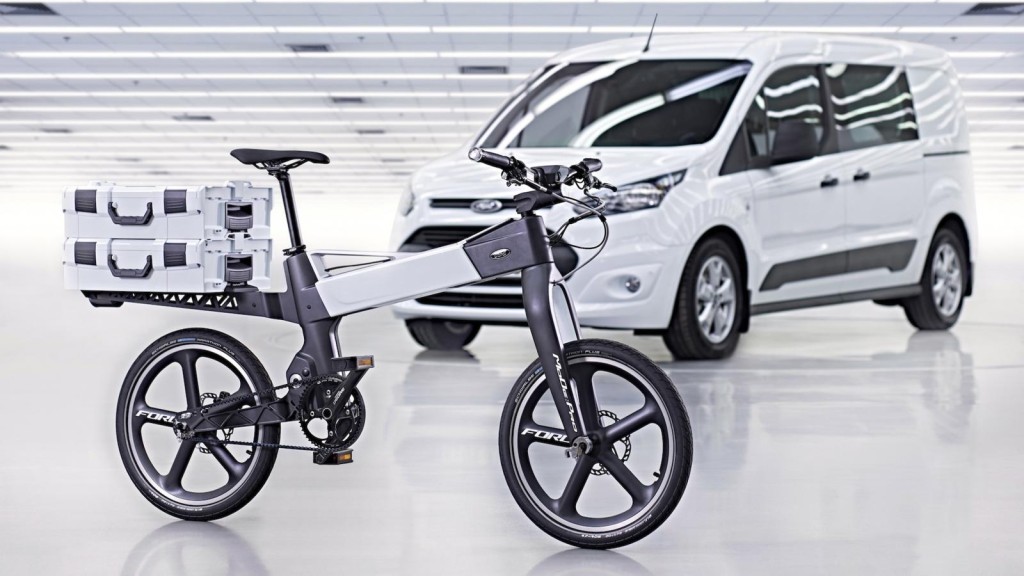 **Details:** The old saw, “Youth is wasted on the young,” might’ve been coined after a longing gaze at the Rocket, from the UK’s Boxer Cycles. There is no adult, we reckon, who would not relish the chance to strap into this glorious kid-carrier’s aeronautically inspired cockpit and hit the road. Mounted atop a stout girder frame, the nacelle offers space for four little ones on reclining, red upholstered bench seats with five-point harnesses. (An electric motor drive system mercifully augments parental leg power.) The nosecone features an interior storage locker and, on the outside, a single headlamp with high and low beams. There’s a jaunty horn, fore and aft turn indicators and a USB charging port for a mobile phone. There’s even a jet-engine sound simulator linked to throttle position. The requisite vintage aviator helmet and goggles, however, are not included. 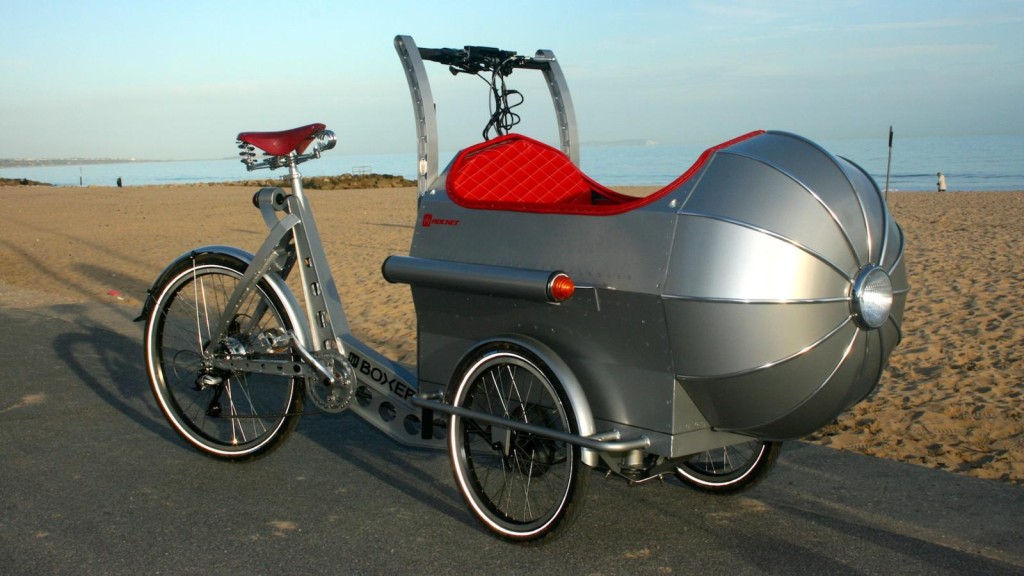 **Details:** The typical cargo bike is a two- or three-wheeled contraption with a traditional upright riding position and stowage space within an extended nose or elongated tail. The Velove Armadillo is not a typical cargo bike. This four-wheeled, fully-suspended pedal-electric hybrid hauler puts a semi-recumbent driver up front and a 35-cubic-foot cargo box at the rear. The quadracyle is so adept as a cargo-van replacement in urban centers that DHL Express Netherlands has begun making deliveries with one (which it calls the Cubicycle) in the Dutch city of Almere. The company reports that an average day for the Velove bike includes hauling 275lbs of parcels and logging more than 30 miles. For now, Velove’s brawny Armadillo is still in prototype form, but the Swedish startup aims to kick off production next year. If you just can’t wait that long, we hear that DHL is hiring.

**Details:** However virtuous, a green product does not win converts by trading on guilt. Rather, it wins on desirability. Michigan-based artist collective the Future People wheeled their beautiful vision for petrol-free mobility into the proverbial lion’s den, the 2015 Detroit auto show, and managed to seize, if not monopolise, the spotlight. One of the two prototypes shown, the Zeppelin, is a riveted, streamlined bubble evoking R Buckminister Fuller’s wild Dymaxion machine from the 1930s. Two passengers pedal in unison to create forward motion, while behind the seats is a massive storage bay, perfect for errands around town. But the Zeppelin cuts such a captivating profile that its utility reads as a bonus feature. 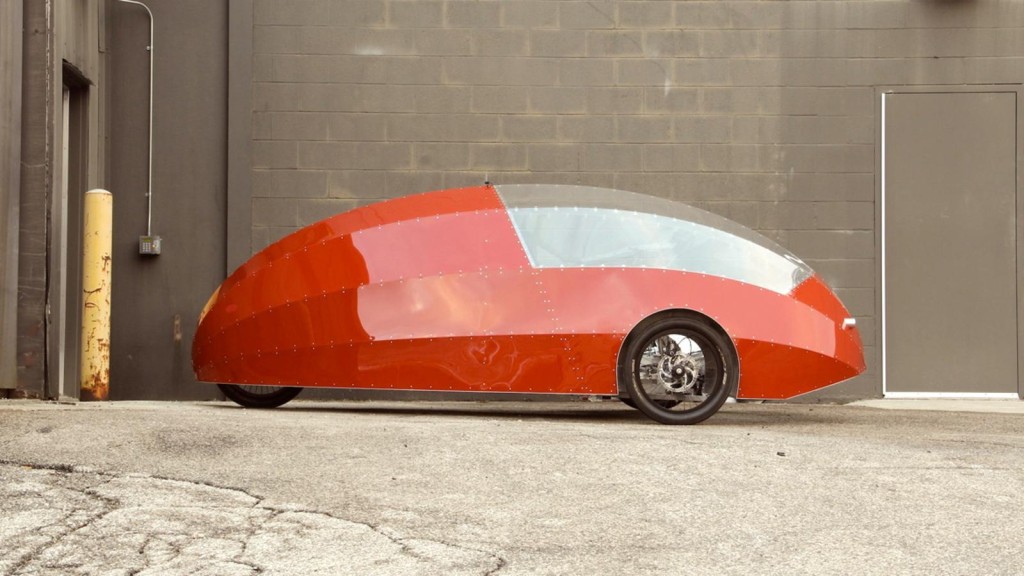 **Country of origin:** Italy **Details:** The dramatic Bicicletto from Italy’s SPA – the Società Piemontese Auto mobili, a venerable name in car production and design that dates to 1906 – takes inspiration from the piston-powered café racers of yore. But don’t be fooled: this pedal-electric hybrid is packed with 21st Century tech, including a glossy carbon composite frame that keeps weight to a manageable 52lbs. The battery resides in the down tube; that faux fuel tank is actually a storage compartment topped by an LED display that reports speed and battery level. Under electric power, the Bicicletto will reach a top speed of 45km/h (28mph); the company claims it will cruise for 30 miles on electricity only, or as far as 75 miles with pedal assistance from the rider. Plugged into a standard household outlet, the battery will recharge in five hours. Like some other wheeled beauties from Italy, the supremely stylish Bicicletto will not come cheap. When the bike arrives in Europe late in 2015 (and the rest of the world in 2016), it will command roughly as much as a new Fiat Panda.

**Details:** Out of every 10,000 bicycles that convey riders down road and trail, perhaps one or two are actually transportation. When 220 such singular machines come up for sale, the world stops to gawk. Vienna-based designer Michael Embacher is auctioning a portion of his collection, regarded as one of the world’s finest, and the uncatalogued reads like an encyclopedia of rolling delights. Feverish bidding is expected for a circa-1937 Schulz Funiculo (pictured), one of three in the world and the only working example, which Embacher originally purchased in France for $20,000. Suffice it to say bidders should bring their loosest wallets to Vienna’s Palais Dorotheum on 19 May. 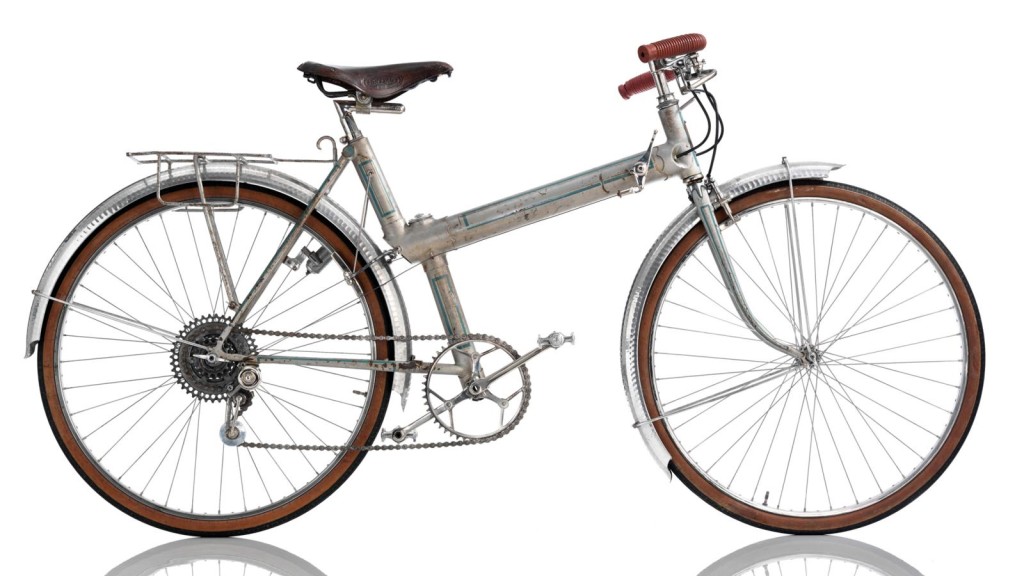