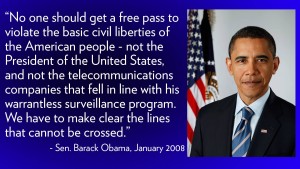 Very important speech by M.r Obama the President of United States of America (USA) as he said that “No one should get a free pass to violate the basic civil liberties of the American people – not the president of (USA) United States, and not the telecommunications companies that fell in line with his warrant less surveillance program. We have to make clear the lines that cannot be crossed.”