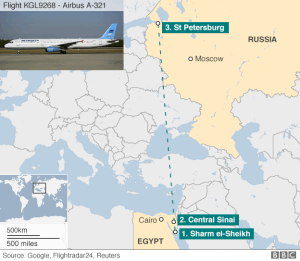 A Russian airliner has crashed in central Sinai killing all 224 people on board, Egyptian officials have said. The Airbus A-321 had just left the Red Sea resort of Sharm el-Sheikh, bound for the Russian city of St Peters burg.

Wreckage was found in the Hasana area and bodies removed, along with the plane’s “black box”.

An official described a “tragic scene” with bodies of victims still strapped to seats.Russian President Vladimir Putin has declared Sunday a day of mourning.He has ordered an official investigation into the crash, and for rescue teams to be sent to the crash site. Egyptian officials said 214 of the passengers were Russian and three Ukrainian. A passenger list published by the Russian Association of Tour Operators showed that 10 of those on board were under the age of 10, with one only 10 months old.{BBC}